A Federal Recognition Board, with COL Field as president, examined local officers and some twenty other NG officers prior to the activation of Headquarters Co.

Gov. J Strom Thurmond, commander-in-chief of SCNG, was present and made a short address on the Aim and Purpose of the National Guard.

The following officers and enlisted men were sworn in to the SCNG and organized as Headquarters Co., 51st Inf. Division by Gen Dozier:

Headquarters Company has a T/O of 4 officers and 76 enlisted men which leaves vacancies for 2 officers and 64 enlisted men.  All citizens of Calhoun County between the ages of 17 and 35 are urged to contact ant member of Headquarters Company for information on enlistment in the SCNG.  Terms of enlistment are for one or three years and pay is based on grade and rank, one day pay for each drill period.

Headquarters Company will meet at 7 p. m. at the Legion Hut each Monday.  Men interested in becoming members are urged to attend these meetings.”

As part of the Army National Guard being reconstituted nationwide in 1947, Hqs Co, 51st Inf Div was being organized before receiving federally recognition on 15 Sep 1947.  One of the first new recruits of CPT William T. “Boots” Oliver, the Commander, was James Arant.

Mr. Arant said in an interview that he was 15 years old when he enlisted in 1946 and initially the members first met for 2 hours on Monday nights at the jail house on Mack Street in St. Matthews.  This was the first of four temporary meeting locations before the new armory was built on Bynum Street in St. Matthews, South Carolina. As the size of the unit grew the meeting place was moved to the commander’s filling station on the northeast corner of Hwy 601 and Hwy 6 (The Gulf Station).

He also said the general purpose of the company was to support the Division’s General Officers and also feed the Division Band while at Summer Camp. Mr. Arant spent his first few years driving for Generals Hennigan and McMillan.  Gen McMillan was from Florida as the General Officers for the Division changed out alternately between South Carolina and Florida as an arraignment between the two states adjutants general.

The Division Air’s L-17 was also internal to Headquarters Company with the mission of supporting the Division’s General Officers and other VIP flights.   Additionally, the mission for the L-17 was to provide VIP and other supporting flights for the State Headquarters.  There were at least five pilots, 1LT Billy Dent, 1LT James E. Moore, 1LT John F. Barrie,  1LT Ernest Lent,  and one other, assigned along with mechanics, Ben Carroll, Furman Pricket, John P. Grant, and Charles M. Walker.  Because the pilots and mechanics needed to stay with the airplanes located away from the rest of the unit they were considered an elite group of the company.  The Air Section was always located in areas where the airplanes could operate and be maintained.  During drill assemblies the pilots and mechanics were generally with the airplanes at Congaree Airbase or at the Ft Motte Airstrip.  During Summer Camp they would bivouac at Hilton Field on Ft Jackson or the airfield on Ft McClellan, Alabama.   Hastily built airstrips were used for training during Summer Camp while training at Ft. McClellan to simulate combat landing scenarios. 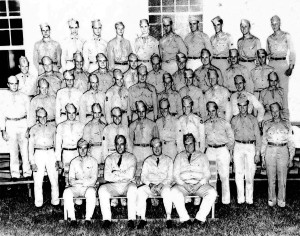 “GARAGE BEING BUILT FOR THE NATIONAL GUARD

According to Cpt. W. T. Oliver, construction of a garage for Headquarters Company, 51st Infantry Division, was begun the first of the month.  The land on which the garage building is being built was given by the Town of St. Matthews and is said to consist of five acres.

The building will be 54 feet by103 feet and contract work is being done by Cecil Smoak, local contractor.  It is said the building will be completed in 90 days.  It is being paid for from a $30,000.00 Federal appropriation.  A cyclone fence will surround the motor park where the garage is being built, the fence to cost approximately $400.  The street in front the premises is being surfaced by the State Highway Department.

At a date yet to be decided upon, an armory will be built on the grounds, the cost of which is said to be about $40,000.00.  A part of this fund to be state appropriation.

Headquarters Co., 51st Inf. Div., has besides regular equipment for the men, ten vehicles — Six Jeeps and four army trucks.  Water will be supplied by the Town of St. Matthews, while the South Carolina Electric and Gas Company will install the lighting system.

Guy Wannamaker is the caretaker for Headquarters Co.” 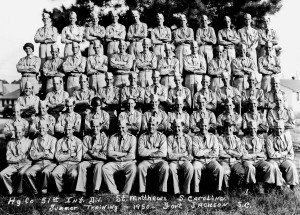 Construction began last week on the National Guard Armory for Headquarters Company, located here at St. Matthews.  It will cost approximately $140,000 and will be completed in approximately 6 or 8 months.  Site for the new armory is several 100 yards in front of the garage now being used by the National Guard as a temporary armory.  Upon completion of the new armory the garage will be used for storage of equipment.

It will be brick and concrete construction and will have radiant heat in the floor.

Architect for the building is Heyward Single and his associates Parrot, Riley and Pearlstine.  George A. Creed & Son is general contractor and plumbing sub-contractor is E. J. McMahon of Augusta”

The following paper was written in 1961 by Jeanne W. Ulmer, Executive Secretary of the Calhoun County Historical Commission.  It is being added here because its title and content:

Construction of the Armory Garage begun September 1948 on land given by the town of St. Matthews and comprised of five (5) acres.  Contactors of the garage Craig and Roberson, Columbia.  Sub-contractor was Cecil Smoak, St Matthews.  The garage was built at a cost of $30,000.00.

The construction of the Armory itself was begun the first week in October 1954 and completed in the spring of 1955 at a cost of $140,000.00.  The armory contains an assembly room (100X150); a 1000′ indoor firing range; five (5) offices; locker rooms and restrooms for enlisted men; three (3) classrooms; and a supply room.  it is built of steel, brick and concrete with radiant heat in the floor.

Architects of the armory were Heyward, Single, Parrott, riley, and Pearlstine.  George A. Creed and Son were the general contractors with sub-contractor, E. J. McMahon of Augusta, Ga.  The County delegation was comprised of Senator L. Marion Gressette and Representative Henry L. Lake.

The 1954 Company Commander of the 51st National Guard unit was Cpt. John W. S. DeMars.  The unit at this date was comprised of eight (8) officers; one (1) Warrant officer; and 95 enlisted men.” 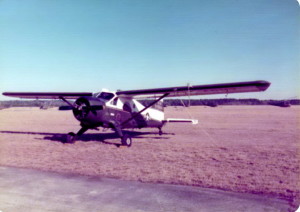