From 1981 until 2007 the original South Carolina Military Museum was located at the Sumter Armory.   In 2007 the museum was relocated behind the Bluff Road Armory where it would be more centrally located within the state.  The new location also provided much more useable floor space thus allowing the museum to grow.

Our museum is dedicated to collecting and preserving artifacts from the militia days to present.  Considering the National Guard started in1670 and Army Aviation is a relatively new program, by comparison aviation artifacts are not readily available.

However, in June of 2012 our museum was offered an opportunity to pick-up an H-13 helicopter from the South Dakota National Guard Museum.  The uniqueness of this aircraft was that it was the first H-13 to be purchased by the Army after the split of the Army Air Corp from the Army.  The manufacture’s plate identifies the helicopter as serial number “1.”  Since the H-13 was the first type helicopter to serve in the South Carolina Army National Guard, it seemed natural for our museum to take ownership of the helicopter for the purpose of being displayed In an Army Aviation exhibit.  Soon the decision was made to acquire the aircraft for prominent display in South Carolina.

As when any new airframe is received, it’s condition had to be evaluated to determine it’s airworthiness and in this case develop a plan to restore it.  So far one of the best things that happened for the Army Aviation exhibit was CW5 (ret) Ron Claypool joining the museum staff as a volunteer and ultimately being designated as the project officer for the restoration of the  H-13B.  A task list was developed of what needed to be done and the order in which they should be accomplished. 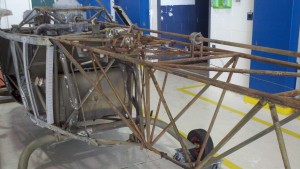 First the sheet metal skin was removed.  Next the airframe was pressured washed and a coat of primer applied.  The engine and transmission were removed, partially disassembled, and cleaned

Numerous calls were made to suppliers around the country looking for parts.  Most responding by saying, “You gotta be kidding me!”  Those parts which were missing, broken or unusable would have to be made from scratch with the materials at hand.

After weeks of searching for a bubble, a family was found in Texas who for years made bubbles for Bell 47’s but were now out of business.  After a lot of calls they consented to form one for the H-13B. 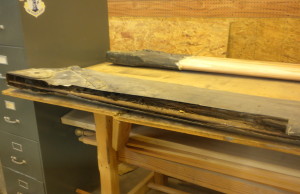 Next came the Main Rotor Blades.  After laying exposed to elements for twenty plus years the blades had rotted from the inside out.  A three foot section of the root end plus the steel leading edge spar were salvaged from one blade and the leading edge steel spar from the other blade.   After many hours of work, a set of rotor blades were constructed for display. 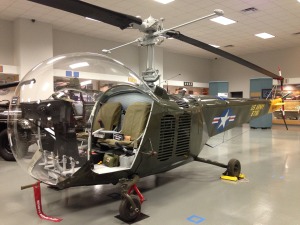 The first H-13 to be purchased by the Army after the split of the Army Air Corp from the Army and bearing the manufacture plate identifying the helicopter as serial number “1” is now prominently on display at the State Military Museum.  After approximately two years and many hours of hard work and research, the restoration is complete.  Congratulations to Ron Claypool and the many , many other volunteers making this project such a success.  It looks great in the picture but you owe it to yourself to personally visit the museum for a look see.  The helicopter will remain in it’s present location until the Army Aviation exhibit area, which in planning stages, is completed.  Again, hats off to all those responsible for making this happen.