The “by the book” method of tracking and balancing main rotor and tail rotor systems of the UH-1’s was to track the main rotor by using a metal tracking flag with bungee attached strap and grease pencil markings.  The field expedient method was to use a bamboo pole wrapped with foam rubber and masking tape.  Tracking the tail rotor was done with a grease pencil.  The results were generally measured by the seat of the pants method during repetitious test flights.  Norman Davis from the prop and rotor shop tried to fine tune this method by putting a bottle of Prell shampoo on the instrument panel and drop BB size lead shots in the top and watch to see if they bounced up and down or moved laterally.

This would help determine if the vibration was a lateral vibration being disguised as a vertical one. The number of test flights would depend how many adjustments were needed to smooth the vibration level.

In 1984 Chadwick Helmith came out with the Chadwick-Helmuth 177 Vibrex including a Chadwick-Helmuth Whirligig was used universally by the Army.  The system worked well on the UH-1s and OH-58s but very difficult to use on the larger aircraft. (A Chadwick-Helmuth 177M-6A Helicopter Rotor Blade Track and Balance Kit can be bought today for approximately $3900.00) 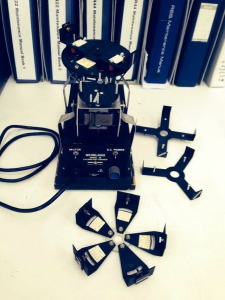 In South Carolina, a mechanic from the prop and rotor shop along with CW4 Lem Grant, the Maintenance Officer took ownership of the system to become the resident experts on its operation and pioneers of  potential uses.  From time to time while working with the Vibrex kit on an aircraft they would take readings of different vibration levels at different locations on the airframe as well as around the gearboxes, bearings, and in the oil cooler area and chart the results for later reference.  On one occasion the mechanic and CW4 Grant were preparing  to work on a pilot’s write-up referencing a high frequency vibration when they decided to use the vibrex equipment to take some readings in several of the know areas where high frequency vibrations were known to exist and compared the reading with their chart levels.  After all was said and done they decided the number one hanger bearing could be the problem and it was changed out.  During the MOC more vibration measurements were taken specifically of the hanger bearing.  The readings were similar to the original but not close to readings on other aircraft that they had previously taken.  They made a conscious decision to once again replace the hanger bearing.  On this MOC the high freq vibration was gone and by the way the vibration levels at the hanger bearing was now in close proximity of the levels of the other aircraft.

AMSCOM Engineer, Sam Cruz happened to be working on the development a new tracking system and had Lem Grant travel to St. Louis to join in the development discussions.  Prior to leaving South Carolina CW4 Grant conferred with the State Aviation and Safety Director, MAJ Mark Rhett to assure the aviation leadership at home supported his active participation.  While at the meeting in open forum, he committed SCARNG to participate in further development of the AVA (Aviation Vibration Analysis) system which would include aircraft and flight hours for test flights.  MG Williamson asked CW4 Grant  if he didn’t think he ought to check with his commander before making that commitment but of course that check had already been made. The General gave thumbs up to continue forward with Scientific Atlanta and SCARNG working together on the development.

The AVA, a ground support system, was fielded in Iraq in 1991 and soon after Scientific Atlanta was sold but the new company failed.  Intelligent Automation Corporation (IAC) picked up support for the AVA in 1993 and later the AVA box was modified to accept 18 accelerometers thus making this new configuration of the AVA capable of supporting the UH-1, UH-60, and AH-64.  As automation capabilities progressed it became possible to create a light weight (VMU) package to  be embed on the Army’s AH-64, UH-60 and CH-47 fleet thus, the beginning of the Vibration Management Enhancement Program (VMEP).  By this time another prop and rotor mechanic, Tim Cook, became the VMEP expert in South Carolina and deployed to Iraq representing IAC for the fielding of the VMU package for the first full usage by an aviation battalion.

As fielding and testing started up, lots of data was being collected  and stored for analyzing and warehousing for future prognostics.  So to answer the question, “What by-products could be derived from this information?”, SCARNG started looking to where the rubber meets the road, ULLSA TAMMS data, to collaborate the effectiveness of VMU installations and evaluate the cost benefits.  In 1996 SCARNG teamed up with the University of South Carolina Department of Mechanical Engineering to continue to move forward with further development of vibration analysis of the Army’s helicopter fleet. 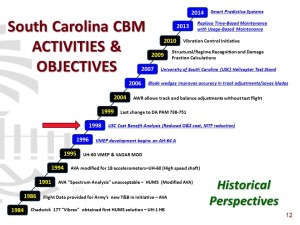