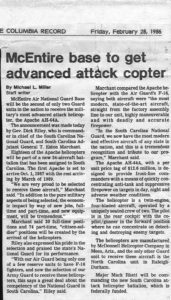 2 Oct 1986 – Troop D, 1st Squadron, 101st Cavalry was reorganized as 51st Aviation Battalion (Attack Helicopter).  This meant South Carolina would have the second of three Army National Guard APACHE battalions.  Also, this reorganization meant the transition would be straight from UH-1M gunships and UH-1H’s to AH-64A’s and UH-60A’s.  The other two battalions were flying Cobras  before transitioning to the APACHE  This type transition would be a first of a kind for the National Guard and generated lots of MOS and pilot transition training.  Even though Troop D had 125% strength at the time the increase in authorized personnel was quickly overcome by cross level slotting troop personnel as well as other South Carolina guard units.  .  Slotting of personnel from Troop D was not very difficult because if you were to look at the Troop MTOE it looked somewhat like a mini battalion.  There was a HQS Platoon, a Recon Platoon, a Gun Platoon, an Observation Platoon, and a Maintenance Platoon.  The 51st Aviation Battalion came with a Headquarters and Service Company and three Attack Companies.

Training for the new attack helicopter mission began immediately.  During Annual Training of 1987 at Travis Air National Guard Base the staff sections and the companies exercised every aspect of the training doctrine as possible using on hand assets including the UH-1H’s and UH-1M’s.  To get to AT the unit still had to borrow trucks, radios, and other commonly used equipment.  This borrowing ended as the unit priority changed.

By the end of AT, lots of class dates for MOS reclassification and Q course transition training were being received.  In fact some personnel were in school by this time. 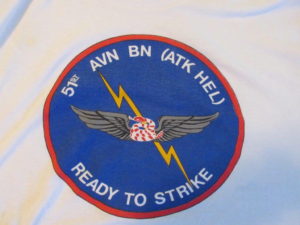 Boyd Davis printed T-Shirts with this logo on the front.